On the 3rd July 2019, Howick Lions Club welcomed it's new officers for the next 12 months. Immediate Past District Governor Wendy Miller presided over the ceremonies. 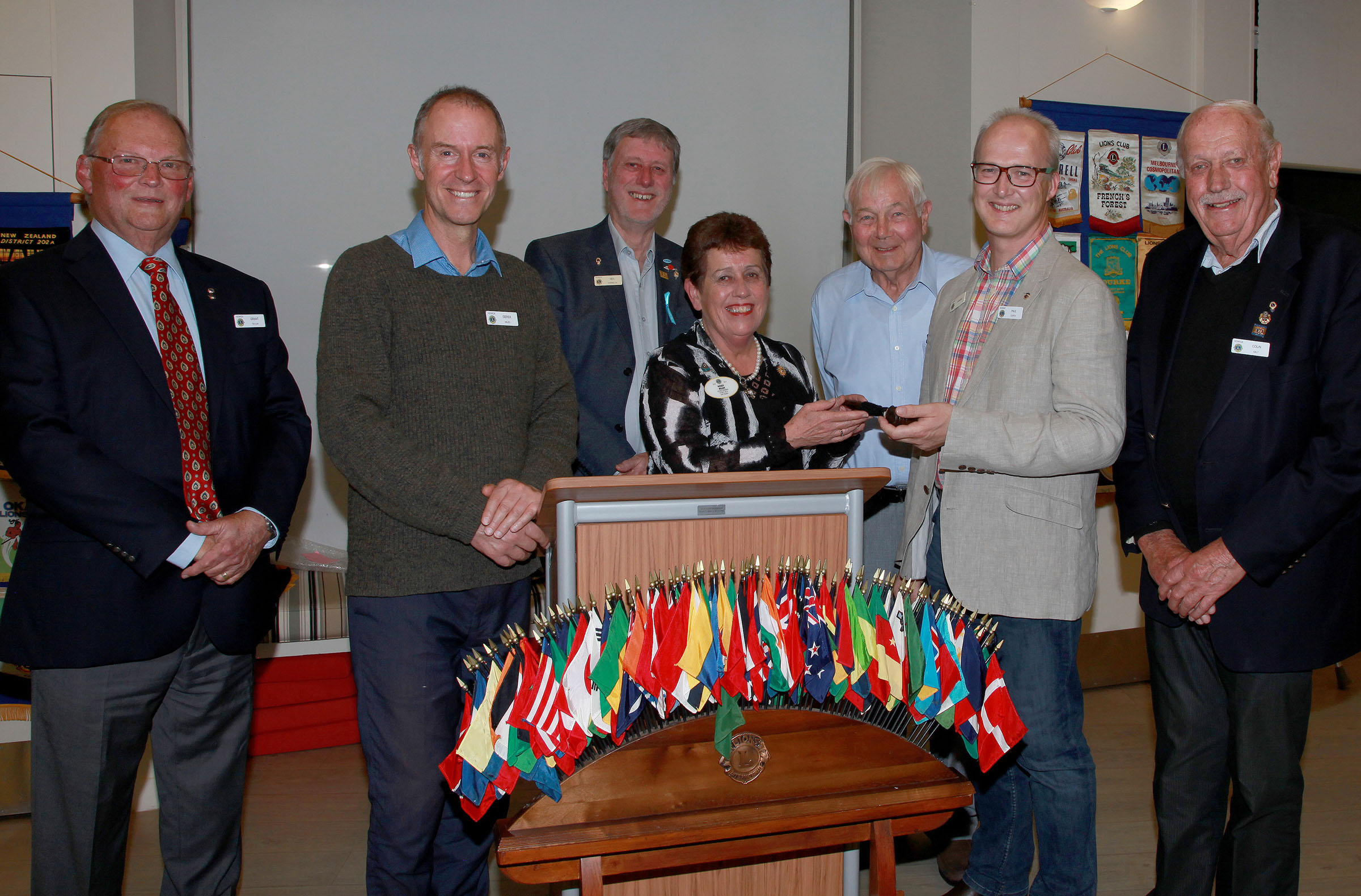 As many of you know, my father has been a Lion for about 40 years. He’s been a President three times at two clubs, held pretty much every club position there is and he’s a Melvin Jones Fellow. Dad was so proud when I told him I was joining Lions, but that paled into insignificance when he watched his grand-daughter Ella inducted into our Club! I was well and truly eclipsed!

But when I joined Dad said, be careful son, don’t put your hand up too often because the next thing you know they’ll be making you President. Take it from someone who knows.I said, don’t be daft Dad, that’s never going to happen!

Well, not for the first time in my life I’ve found myself looking back at something Dad said, and thinking, maybe the old man knew what he was talking about afterall!

But I’m not here under duress, I’m here because I want to be here. And thank you for putting your faith in me to lead the club for the next 12 months.

I’d like to thank Immediate PDG Wendy Miller for agreeing to preside over the ceremonies tonight. Prior to Wendy becoming District Governor, my only real experience of District Governors has been when they’ve visited our club for their annual duty call. But Wendy, this is the third time in the last 12 months you’ve visited us, and I’d like to thank you for being such a good friend of our club.

It seems de rigueur as President to have a motto. Well, my motto this year is simply going to be “We Serve”. I’m a simple guy, and if it’s good enough for our International Organisation, then it’s good enough me. But in terms of my way of working, I’m a big fan of ‘evolution, not revolution’.

In the three years I’ve been a member of Lions, the last two serving as Membership Chair, I’ve come to understand that membership of Lions Clubs, and service organisations in general, is sadly in decline in many of our developed regions. New Zealand – and indeed our District – are not immune.

Our club has a proud 57 year heritage of serving our local community. But that will count for nothing if we don’t continue to evolve to meet the changing needs of our community. I know that our club is relatively good at embracing change. In the last three years, we’ve moved venues, developed a new website, become active on social media, under Grant Taylor's leadership we stepped up to take over Howick in the Park and re-brand it as our Summer Festival when the Military Tattoo pulled out. We're working closely with Rotary to launch a new Fireworks Display event under Brian Stocking's lead, and we’ve sponsored the formation of the new Howick College Leos Club and we’ve re-kindled our relationship with Howick Historical Village.

With the latter, fuelled by June Salt’s amazing home baking, and under Alan LaRoche’s keen eye, we’ve steadily worked our away around the Historical Village painting anything that doesn’t move. Sometimes the paint even finds its way onto the old buildings, but mostly it ends up on Brian Stocking (even when he wears his giant full body condom).

Our hard work resulted in our club being presented with the coveted Club Excellence Award this year.

I want to see our club continue to evolve, but that means understanding the changing needs of our community.

Each year we sponsor a young adult to attend the Outward Bound Leadership course, and last year, under Alan Sheath’s leadership we worked with our local community police to identify a young man who had appeared on the Police’s radar, but who they thought had the potential to turn his life around. So instead of sending someone who would probably achieve anyway, we sponsored Kauri.

I’d like to continue in that vain. You don’t have to go too far past Botany to find low decile schools in our area, that have to deal with the various challenges that poverty can bring. I’ll be challenging the Youth Committee to identify and reach out to those schools to see if there is any way that we can help, without any preconceived ideas about what form that help could take. It could be as simple as paying for a pair of new shoes, or a winter coat, or supplies for the school nurse.

Community food pantries have appeared recently on Whitford Road, Aviemore Drive and outside Owairoa School, and I understand one is going to be put up in Pakuranga. These are free food pantries, stocked by the community, for people in need. I’d like our club to consider making food donations to these pantries.

It’s also clear that we need to establish new income streams. The great thing about being part of Lions Clubs International is that we don’t need to re-invent the wheel. We can see what other clubs are doing around the world to fundraise and adapt them to work for our club. So with that in mind, I’m going to be introducing a new element to our Dinner Meetings called ‘Food for Thought’. So while you’re working on your desert, I’m going to use that time to present a fundraising idea from another club – from anywhere in the world – that I believe has merit. I’ll then bring that idea back to the Business Meeting for further consideration.

Contrary to popular belief, I haven’t forgotten to give Ian Packwood the names for the committees for this year. This has been deliberate because I’d like to explain some changes I’d like to make first.

The great 19th century American showman PT Barnum famously said, ‘Without promotion something terrible happens – nothing’. With that in mind, I’d like to create a new PR and Communications Committee. This group will be responsible for all internal and external communications, including producing The Tatler, updating the website and social media, and any artwork, articles and printing for our various activities and events. Colin Salt has kindly agreed to lead that committee.

I’d also like to establish a Programmes and Community Committee, responsible for our Community outreach, such as Howick Historical Village, but also organising our club social events, liaising with our fellow clubs for joint meetings and identifying and booking great speakers for our Dinner Meetings. As yet, I don’t have a Chair for this Committee, because I wanted to announce it first. So anyone who’d be interested, please will you let me know.

I also intend to throw open the sub-committees for our events and activities, to give everyone in our club the opportunity to be involved and to feel involved. The first cabs off the rank will be to convene sub-committees for the Summer Festival, Senior Citizens Christmas Party and Water Safety Picnic. I’ll be circulating an email to ask for people to put their names forward for inaugural meetings at which I’ll be asking the committees to appoint their own Chair.

You’ll also be pleased to know that I’ve been working on a budget!!I’ll circulate the budget before the next Business Meeting and I’ll put forward a motion at the meeting for it to be adopted.On that note, there’s a couple of other changes that I’ll be making to the Business Meetings. Firstly, I’m going to start the meetings at 7.00pm. That should give the Committees time to meet to discuss any business beforehand if necessary, because there’s going to be no ‘committee time’ during the Business Meetings. Instead, I’ll be asking each Chair to come prepared to give a verbal report.

I know I can count on your support, but nevertheless I invite you to talk to me directly if you have any concerns about the changes I’m proposing.

As John Lennon once said, ‘Life is what happens when you’re busy making plans’. In our case, we’d planned for Rex to be our Secretary for another year. But as we know, Rex needs to focus on his treatment and on getting better, so I’m making an impassioned plea for someone to step up and offer take over as Secretary in the meantime. Not having a Secretary isn’t an option and I’m hoping that someone will put themselves forward.

I’m sure there will be other things that crop up over the year that will come from left field, but I know that we’re a strong club and we’ll take them in our stride. I look forward to working with you all.